It is a long established fact that a reader will be distracted by the readable content of a page when looking at its layout. The point of using Lorem Ipsum is that it has a more-or-less normal distribution of letters, as opposed to using

General Administrators such as office administrators or help desk managers have plenty of tasks under their position and it is always advised that they make a record of all these tasks so that while updating the resume it becomes clearly easy and less time consuming. Our site offers an incredible, easy and fast way to create resumes using the resume builder tool which has templates according to the industry of your choice. There are several options available for each industry. You can go through them and select. Make the necessary changes as per your designation and experience and you are ready to present your resume.

When you’re in administration, you should expect to head the office ship even if you’re not officially in charge. You would have to make sure all work operations go smoothly without any snagging or failing.

Hence, your job responsibilities in such an industry would be many and varying. They may never get done at the end of the day, week, or even the year. You would have to man phone calls, draft emails, distribute salaries, file correspondence and most likely handle a budget as well. Other duties could include making purchases for the office, get in touch with suppliers or buyers, and generally make sure the rules, guidelines, and regulations are being followed.

When just starting out, make sure to consult a resume samples creator or online resume templates to showcase your skills for such tasks.

With experience, these responsibilities would come by instinct instead of your having to think about them all the time. However, as you experience a rise in your administrative rankings, you can expect to delegate some responsibilities to your juniors.

Since ‘general’ is in the very title of ‘General Administration’, we can assume that the required skill level would match this aspect. However, there are quite a few skills that can make your resume stand out and have hiring managers add your bio-data to their databases.

Below are some examples of skills you could highlight while working on your résumé template as well as your CV. You can give a few more details in the later type of document. Within a resume for General Administration, though, you should seek to keep things as short as possible. Remember, you have to squeeze all your talents and skills into one page!

Since you need to prove a lot of skills and talents, a résumé objective would make more sense than a career summary here. In any case, many general administration jobs are usually at a lower level. This means you would probably not have much of a career to speak of when you start applying to this industry.

Of course, even if you’re a recent college graduate, you may have had some experience while doing internships or volunteer work. You should hence highlight the skills you’ve learned so far, making special mention if the skills were practiced as well as studied.

You resume objective should tell prospective employers that you can handle several tasks, at the same time if need be. The impression should be conveyed that your time management and projection management skills are very strong.

Make sure that you mention the company by name in those first few lines. Plus, take a look at the job requirements and highlight those skills of yours that match those. For instance, if you’re applying to be an administrative coordinator for a school, you may want to show your experience in handling budgets. You can then add these skills to a resume sample creator or resume template to get something like the examples of a resume below: 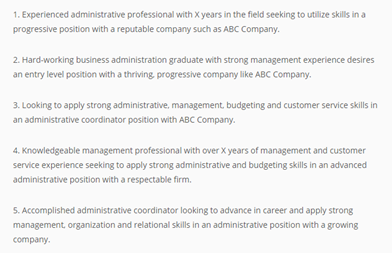 Resume objective are on their way to extinction. However, they’re still important in terms of capturing a recruiter’s attention and making your document stand apart from the rest. In order to make sure you get that benefit, pepper your resume objective with the right industry keywords and phrases. These would set you apart as a candidate who just might be made for the job.

Keep in mind that different companies would require a different set of skills. Along with the general skill set for administration, you should also focus on certain unique traits. This would also show that you have an active interest in that organization itself, not just looking for a paid job.

You resume objective should tell prospective employers that you can handle several tasks, at the same time if need be. The impression should be conveyed that your time management and projection management skills are very strong.

Think of a résumé objective like a thesis statement. You have to stick your neck out and really work on it in order to create your resume and CV as well. Hence, in addition to the name of your company, you should mention something of your own brand as well as the goals you mean to achieve with this position. The best part about using a resume template is that it already has readymade objectives. You can easily customize them to match your profile and what you want to present. Showcase all the good things you would bring to the company and make yourself an absolutely indispensable addition!

As mentioned above, most of the jobs you would apply to within general administration are at the clerical or entry level. They hence don’t really require a very high level of education, unless the organization itself insists upon it. For instance, being an administrator in a school would definitely require a certain level of education, preferably a Bachelors’ degree.

In general, a high school diploma or its equivalent would be enough to get you in the door for general administration. However, a Bachelors degree would be preferred by most organizations. Any higher than that, and you may be overqualified for the beginner jobs in this field.

If you really want a certain position, or a promotion to a higher level, you may want to get certain licenses or certifications. These may require you to attend some classes or workshops. You may contact organizations like:

You can get some help from resume generators to create resumes like the one below: 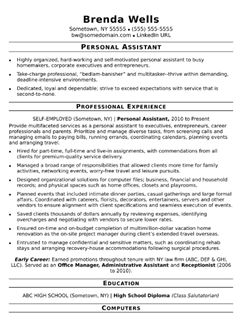 Get Connected With Us